Being involved in any accident is a difficult and painful ordeal. Even if you were not harmed, the fact that you hit someone can be traumatic and fill you with worry. If you hit a pedestrian with your vehicle, you will naturally be concerned about the physical state of the person. You will no doubt also worry about your liability and the possible legal repercussions you might face.

This is a reasonable response, and the first thing you should do is get yourself a lawyer. No matter the kinds of injuries sustained by the person you hit, it is a good idea to retain legal counsel. The person may be able to stand up and walk away from the accident; they may express no desire to sue you; they may indeed seem perfectly fine after the accident. But things can change. The pedestrian you hit may develop complications later on, and they may decide to sue you for the cost of the care they received.

Things will be even more complicated if you hit a pedestrian who must subsequently be hospitalized. In this instance, you should just assume you will be hauled into court.

The first question you must ask yourself is: was it my fault? Just because you were in a vehicle and the person you hit was on foot does not necessarily make you responsible for the accident. If the pedestrian you hit violated pedestrian rules by crossing the street during a green light for cars, then they have some culpability for the accident. 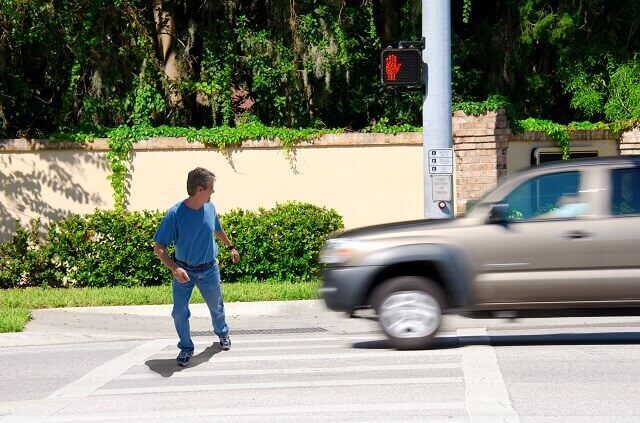 There is a reason that such rules exist. They are designed to protect pedestrians. Although you have a duty to take all measures to avoid doing harm, you cannot be made responsible for the fact that someone decided to step onto a road with oncoming traffic.

The person you hit may try to sue you for negligence, reckless endangerment, or some other form of tort damage. However, most states have laws that give defendants the right to prove that the plaintiff is partly responsible for the accident that led to the injury. This can be based on the fact that they took an action that no reasonable person would take, and that this led them to the danger. People have an obligation to avoid doing anything that would bring harm to themselves. And if they do not observe this rule, then they cannot make someone else accountable for any injury they received as a result.

The reason why you must hire a lawyer straightaway is so that you will have time to prepare for a lawsuit. Knowing that the pedestrian you hit violated the rules is not enough; you must be able to prove it. Hiring a lawyer is the first step. Your lawyer will be able to gather the facts, introduce eyewitness and expert testimony, employ forensic evidence, and bring the relevant bits of law to bear on the case.

No matter what the person you hit says or does in the short-term, you must act as though you will eventually be sued. If the lawsuit does come, here are some of the things that a trained and experienced lawyer can do to defend you and hold off a judgment or settlement that can bleed you of money for the rest of your life.

Popular television programs show limited forensic evidence pertaining to DNA and blood samples. But these are just two of the wide range of things that can be gathered at the scene of an accident. The timeline of the accident and exact way the person fell after they were hit can be used to prove who was really at fault for the accident. Your lawyer will be able to determine where the person suing you was when you hit them by analyzing the location, nature, and extent of their injuries. They will be able to call in their own physicians to assess the injuries of the plaintiff and get an independent judgment on the consequences of the impact. When this is combined with other the other circumstances of the accident, your lawyer will be able to show how the person acted in an unreasonable way.

Your lawyer will be able to call professionals who can testify that, based on the movement of your car and the sudden appearance of the pedestrian in the middle of the road, it was impossible for you to avoid hitting them. They can also call other experts to offer additional testimony to exonerate you.

If you hit a pedestrian, then chances are other pedestrians were nearby. It is an interesting fact in cases like these that people are willing to come forward and testify on behalf of the driver. Although nearly everyone has violated pedestrian rules at some point in their life, when an accident results because of it, people tend to side with the driver. This probably has something to do with people’s innate sense of fairness: if you risk breaking the rules, then you must be prepared to deal with consequences.

Your lawyer will be able to take advantage of this fact and get as many statements as possible from people who saw what happened. Your lawyer will also gather camera footage if it is available. If the accident occurred at a major intersection, the chances are that footage will be available.

Your lawyer will also dig deep into the rules concerning traffic laws and pedestrian crossings. They will be able to present in clear and persuasive language why the person you hit was in violation of them. This is really the heart of the case. The person who is suing you will focus on the bodily injury done to them by your car. It will be up to your lawyer to demonstrate how they could have easily avoided that injury by following certain rules.

Your lawyer will then be able to follow that up by citing law that requires people to take reasonable actions to avoid harm. The ultimate aim is to expose the weaknesses in the contentions made by the person you hit. A skilled lawyer will be able to do this to great effect, and they will make it so that you do not have to pay so much money, if any at all.

You will also need a lawyer if, in the end, you decide to settle with the plaintiff. The person may come to see that they cannot get a judgment for money, given how the accident happened. They may want to come to some other arrangement instead. Your lawyer can help negotiate this.